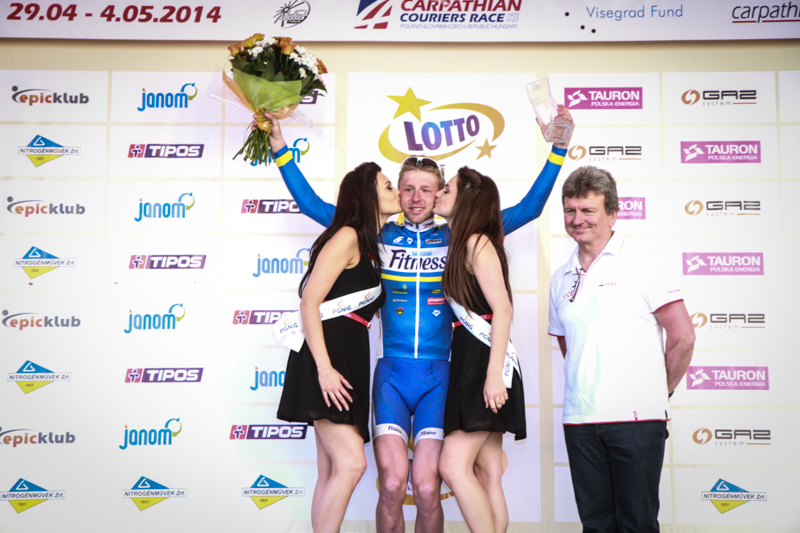 Bartosz Warchoł (TKK Pacific Toruń) claimed victory in the fourth stage of Carpathian Couriers Race, surprising the sprinters with perfectly timed attack in the final kilometer. 22-year-old crossed the line just ahead of the bunch, taking the biggest victory of his career.

Riders started the day facing a relatively short stage, with one steep climb being served as a starter. Peloton set off from Stara Bystrica, saying goodbye to rainy Slovakia and heading towards Polish border.

The pace on the climb wasn’t very fast, even though the group was rushed by first drops of rain falling from cloudy sky. Despite quite steep gradient, the peloton managed to stay more or less together. The rain was a part of the game again but it only lasted a while, as riders got to the top of the climb. Patryk Stosz was the first to pick points in mountains classification, as he outclimbed Koen Bouwman (Cycling Team Jo Piels) and Czech Petr Hampl.

Order was quicky restored on the descent and the pace went up, making it impossible to break clear. Bunch sprint for bonus seconds at the first intermediate sprint was won by Amaury Capiot (Lotto-Belisol U23). Stosz was there again, seeking extra time to improve his overall position, and took second place, ahead of Daniel McLay (Lotto-Belisol U23).

At halfway point, a group of four managed to ride away. This time teams’ leaders stayed out of it and Roman Buzyle (Kiev Regional Team), Kim Magnusson (Vini-Fantini-Nippo), David Dvorsky (Bauknecht-Author), accopmanied by the only Colombian in the race – Cristian Rios (Telcom Gimex) – managed to establish a gap of 25 seconds. The difference went up, surprisingly hitting 1 minute benchmark and allowing the attackers to take bonuses on the second intermediate sprint. Buzyle was first across the line, outsprinting Magnusson and Rios.

Colombian won special premie on the border and the race entered Poland. With 25 km to go, the gap was still 40 seconds and the leading group was working well together. They managed to pick bonuses on the last intermediate sprint, 15 kilometers before the finish line, as Rios crossed the line ahead of the Magnusson and Buzyle.

But this was their last prize and the stage win was out of their reach. Leaders entered final 10 kilometers 30 seconds ahead of the bunch, knowing that they are doomed to be caught. Peloton closed the gap with ease and teams started to look after their sprinters.

Their efforts, however, came to nothing, as Bartosz Warchoł (TKK Pacific Toruń) launched a strong attack. Going under flamme rouge, young Pole managed to get a handful of seconds, taking advantage of narrow roads and two 90 degrees corners. He immediatelly powered to the finish, taking a beautiful solo victory. Amaury Capiot won the sprint for the second place, beating Eduard Grosu in a dash for the line.