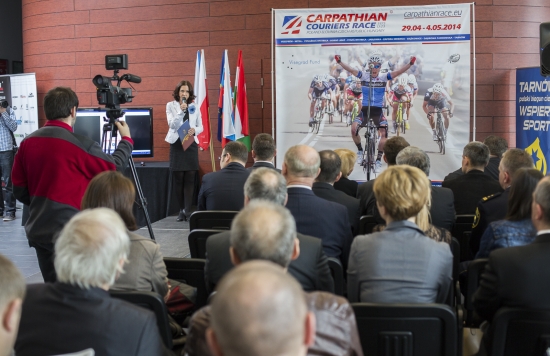 The route of 2014 Carpathian Couriers Race has been officially unveiled in Tarnów. As announced earlier, 6th edition of the biggest U-23 race in Central Europe will last one day longer than in previous years and will welcome 40 teams, a total 200 young riders. This year peleton begins racing in Hungary, for the first time in race history visiting all countries of Visegrád Group – Slovakia, Czech Republic, Hungary and Poland.

The race, which will start on Tuesday April 29, kicks off with 140km stage around Veszprem, Hungary. The riders will not stay long in Janos Hunyadi’s homeland, starting the second stage in Nitra, one of Slovakia’s statehood cornerstones, and heading towards Povazka Bystrica – a small town located among beautiful and peaceful Slovakian mountains.

On a third day peleton visits Czech Republic and marks the first in the race history time trial. The stage covers 30 kilometers over undulating terrain and finishes in Horni Lidec. Demanding fight against the clock may be decesive in terms of general classification and time gaps created on Czech roads may spark applying even more aggressive and risky tactics, as short stage 4 heads from Slovakian Stara Bystrica to Polish border town Jabłonka.

Two final stages are set to take place in Poland. Stage 5 sets off from Niedzica, small town located on the banks of Czorsztyn lake. Riders will not have the opportunity to visit medieval castle towering above the reservoir and dam – hilly parcours and uphill finish in Ciężkowice are designed as the ultimate possibility to change the general classification, as the last stage leads to Tarnów for the bunch sprint and race finale on May 4.