“This is the biggest victory in my career. My first victory in a stage race. I am so happy. This was a fantastic team effort. My legs were a bit tired but that’s normal after a few days of racing. This is my kind of terrain, I feel really good here” – happy winner declared.

„Today I win but I want to thank all teammates who worked for me. We had a rider in the first group but we were expecting a bunch sprint and we worked hard for it in the end” – Galdoune said.

The group headed to the first intermediate sprint with over a minute advantage on the peleton. Penko claimed bonus seconds in Nyriad and a few minutes later collected three more in Tapolca.

With the top riders in the general classification within 10 seconds, the bonuses on the final intermediate sprint were of special interest. The gap went down from 1:35 at the halfway point to only 20 seconds after 80 kilometers and Rog – Ljubljana riders took the initiative once again. Ziga Rucigaj and Tadej Pogacar jumped across to the leaders, hoping to breath life into the breakaway but were soon reeled in as the peloton realized the danger of allowing half of the Slovenian team gang up at the front.

This has settled the issue of bonus seconds as the break quickly gained a minute and Koch sprinted first across the line. The group also secured points at the final climb of the day and Ziga Rucigaj only had to finish the stage to win the mountains classification, courtesy of his teammate Jerman, who collected the points.

The run-in to Papa provided a trademark of Hungarian racing. With a group of 13 up the road, peloton marshallled by only a few riders of Cycling Team Friuli and Polish National Team struggled to bring the gap down. Leaders smelt the opportunity and worked together, in the ifinal 10 kilometers desperately trying to hold on to a slowly shrinking gap. 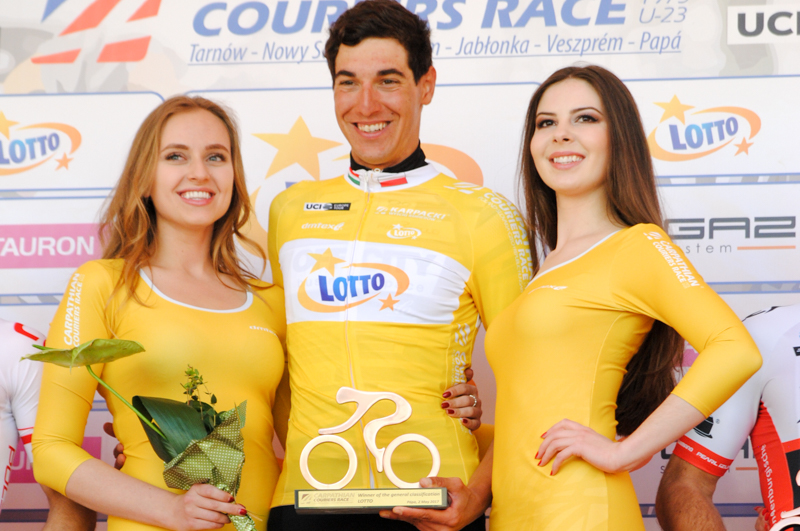 The race radio screamed 30 seconds with 4 kilometers to go and race leader Alessandro Pessot engaged directly, pulling hard at the front to save the yellow jersey. His effort, as well as the work put it by Polish riders brought the attackers back inside the final 500 meters and saw a chaotic dash for the final corner. Delio Gallina riders mastered the turn, setting up Ahmed Galdoune for the sprint. 21-year-old couldn’t miss the chance and took a confident victory ahead of three breakaway riders – Jerman, Olieslagers and Aniołkowski.

Pessot and Małecki finished inside the bunch and the Italian was quickly declared the overall winner. Małecki, winner of stage 2, and LKT Team Brandenburg’s Robert Kessler rounded out the podium.