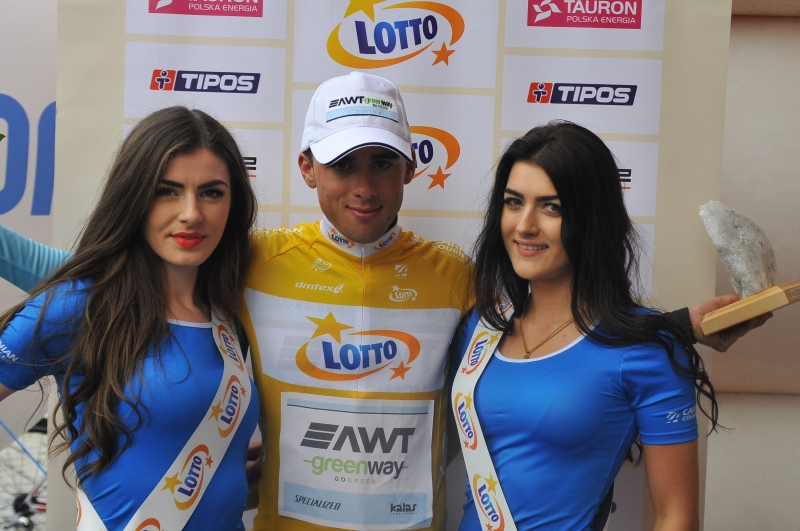 Baska, 21, took his first victory in Carpathian Couriers Race. Sprinter of Etixx-Quick Step feeder team beat Czech Republic’s Frantisek Sisr and Milan Menten (Lotto Soudal U23) in the dash for the line and gave the team second win in the race.

Slovakian sprinter started the stage in his home place – Dohňany – and survived 125 kilometers of remorseless attacks to deliver a stage victory in Nové Mesto nad Váhom.

„I’m really happy, it’s my first stage victory in this race. I started from my home village and to win here is a really great thing” – satisfied Slovak said after the finish.

Penultimate stage started in cold and rain as riders tackled three local laps around Puchov with climb of Lednica on each one of them. Hungary’s Janos Pelikan (Utensilnord) was collecting points on the summit three times in the row and was one of a few riders who managed to jump away from the pack.

Situation remained unchanged throughout the day. High pace in the peloton made forming a break impossible despite constant attempts by Dutch, Kazakh and Polish riders. Twan Brusselman (Cyclingteam Jo Piels) and later Leon Rohde (LKT Brandenburg) managed to establish a small gap but were soon reeled in by the peloton led by CCC Sprandi Polkowice and Tirol Cycling Team.

As the fourth climb of the day approached, peloton started splitting. 2.5 kilometers of steep ascent shattered the group and forced the leader to Alvaro Cuadros (AWT Greenway) to defend the jersey. Spaniard was up to the challenge and took points atop Dubrava, ensuring his closest opponents are within sight.

With only 30 kilometers remaining a group of 15 managed to form as Silvio Herklotz (Team Stölting) forced the pace on the descent. German rider was soon joined by Cuadros group but 3 bonus seconds gained on intermediate sprint moved him up to second overall.

Leaders were not allowed to stay away – junction was soon made and in the last 10 kilometers teams fought for positions and tried to use cross wind to form echelons. A bunch sprint was to decide the winner and fans gathered on the main square of Nové Mesto nad Váhom saw Erik Baska finishing off the effort of his teammates and raising arms in front of his home crowd.

„I targeted this stage. First two days were hard for me, I’m a sprinter. Today it suited me better and it was my goal to win” – Baska said, stressing that he will be eying the last stage in Veszprem.