In memory of Jan Karski 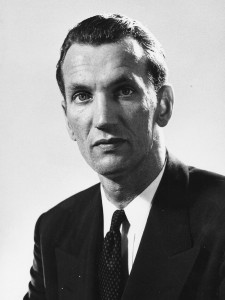 On December 6, 2013 The Parliament of the Republic of Poland passed the resolution to declare the year 2014 to be the Year of Jan Karski. The Parliament decided to “honour one of the greatest Pole of the XX century, […] often considered to be the Man who wanted to stop the Holocaust”.
This resolution corresponds with the subject matter of the Carpathian Couriers Race. Jan Karski carried out priceless information for the Allies, from land occupied by the Nazi, also via Tatra Mountains, Slovakia and Hungary. This year’s Carpathian Couriers Race we also wish to commemorate Karski.
Jan Karski was born Jan Romuald Kozielewski on June 24, 1914 in Lodz. He graduated law at Jan Kazimierz University of Lviv and Corps of Cadets in Wlodzimierz Wolynski. In the beginning of 1939 he started work in the Polish Ministry of Foreign Affairs.
During Defensive War in 1939 he was mobilized and captured by the Red Army. He was identified as a Private since he exchanged his uniform and was handed over to the Germans. Being sent to POW camp, he managed to escape jumping from the train and found his way to Warsaw where he joined the resistant movement.
He became a courier and smuggled information from Nazi-occupied country to the Polish Government in Exile. His first trip, in the beginning of 1940, via Krakow, Zakopane, Koszyce and Budapest, then Jugoslavia and Italy led to France. In June 1941 during his another mission he was arrested by the Gestapo in Slovakia, then transported to Nowy Sacz where he was smuggled out by the members of resistant movement.
In the end of 1942 he delivered written reports and documents about extermination of Jews. Karski completed them with the eyewitness account (he managed to get to Warsaw Ghetto and sorting and transit point for Belzec and Sobibor in Izbica).
As an eyewitness of barbarity, Karski tried to convince western politicians to urgent intervention against Germany (in July 1943 he met with the President of the United States Franklin Delano Roosevelt).
After World War II he remained in the United States. He taught at Georgetown University in Washington. Twice awarded War Order of Virtutti Militari. In 1982 he was recognized as Righteous Among the Nations. In 1995 he was awarded Order of the White Eagle. In 1998 he was nominated for the Nobel Peace Prize. Jan Karski died on June 13, 2000 in Wahshington. The president of the United States Bill Clinton among others participated in his funeral.