Jochem Hoekstra solos to victory on stage 2 with late attack 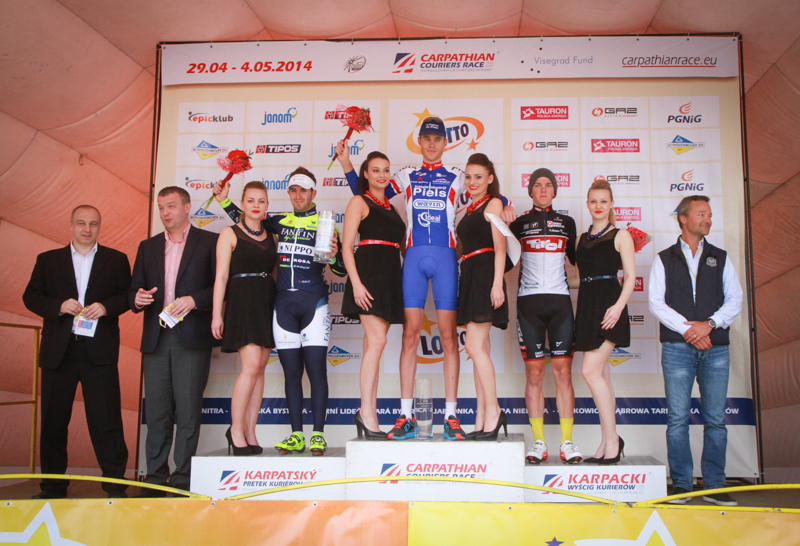 –> Stage 2 results
–> Gallery from stage 2
Jochem Hoekstra (Cycling Team Jo Piels) soloed to a stage victory in Povarska Bystrica, escaping strorm, hail and breakaway companions. 21-year-old rider attacked from a small group and managed to hold a narrow gap all the way to the finish and, as a result, put on leader’s jersey on the stage podium.
After yesterday’s hail-hit opening stage in Hungary, Carpathian Couriers Race moved to Slovakia, making a start in Nitra – one of the country’s oldest cities – and hoping for better weather conditions. Riders had to deal with the longest stage of this year’s edition – a total of 154km – with two climbs in the middle of the distance ensuring a hard day in the office.
– I was feeling good today, we were riding at the front. The weather conditions made it hard to race, but it was the same for everybody – Jo Piels team rider said after the stage. – The race is going to be difficult, we have some tough stages, but I will do my best. Our team is really strong, I am a climber and this kind of parcours suits me.
The day started out sunny and dry, with Willi Willwohl (LKT Brandenburg) leading the general classification. Despite a number of strong attacks in the first kilometers, the bunch stayed together, chasing down every attempt to destroy status quo. Efforts of Dutch youngsters and Polish National Team riders came to nothing and even a group of 15 different teams representatives was not allowed to break clear.
The peloton streched on the first climb – Bojnicky Kopec – as riders from Czech Republic started setting the pace. It was defenitely not enough for Wojciech Kietliński (Pogoń Mostostal Puławy) who decided to attack and managed to establish first significant gap. Jo Piels’ Tawn Brusselman quickly followed his footsteps and was immediatelly joined by Szymon Rekita (Polish National Team), Uladzmir Harakhavik (Belarussian National Team), Joren Touquet (Wallonian National Team) and Julien Kaise (Color Code Biowanze), with Michał Kasperek (TC Chrobry Głogów) and Felix Donath (KED Stevens Team Berlin) on his wheel.
Working together allowed them to reach the bottom of the second climb – Strazov – with a buffer of a minute. 5km long ascent, with some steep ramps leading to the summit, was not the only obstacle, however. Cloudy sky was a clear sign of changing weather conditions – the temperature has dropped from over 20 degrees to only 9 and as the riders approached the climb, they were hit by rain and hail.
Difficult conditions and winding road saw the selection in both groups – five riders were dropped from the breakaway, while the peloton was immediatelly shattered. Touquet earned points atop the climb, with Rekita starting the descent in second place. Others followed and soon a leading group formed, with 24 riders pushing hard and trying to establish a gap. Chasers were only 30 seconds behind, but the race leader was well over a minute down and found himself in the third pack.
Leaders worked well only for a while, commencing to attack each other, as the chasing group started closing the gap. Gerbruder Weiss Oberndornfer’s riders – Tomas Koudela and Michael Gogol – planned to finish the stage ahead of the rivals and forced the pace. They were marked by an Austrian Gregor Muhlberger, Jochem Hoekstra (Jo Piels) and Arkadiusz Owsian (Polish National Team). Kristis Neilands (Latvian National Team), Jean-Albert Carnevali (Wallonian National Team) and Eduard Grosu (Vini-Fantini-Nippo) also decided to join the party and the group broke away.
The action turned out to be a decesive move – as the groups behind merged – 8 riders pedaled hard, thinking only about getting to the finish line. Power of the legs was not enough – in changing weather conditions, with attacks coming every minute, tactics played a key role. Dutchman Hoekstra, wearing number 1 on his blue jersey, proved to be the smartest, picking the right moment to attack and taking off on his own in stage’s finale. He crossed the line 4 seconds before Grosu and Muhlberger and 12 seconds before chasing group, taking leader’s jersey before tomorrow’s time-trial.
Results:
1. Jochem Hoekstra (Jo Piels)                             3:29:17
2. Eduard Grosu (Vini-Fantini-Nippo)                        00:04
3. Gregor Muhlberger (Tirol Cycling Team)
4. Michael Gogol (Gerbruder Weiss Oberndornfer)
5. Aradiusz Owsian (Polish National Team)
6. Jean-Albert Carnevali (Wallonian National Team)
7. Tomas Koudela (Gerbruder Weiss Oberndornfer)             00:07
8. Philipp Zwingenberger (KED Stevens Team Berlin)          00:12
9. Amaury Capiot (Lotto-Belisol U-23)
10. Nikolai Shumov (Belarussian National Team)
General classification after stage 2: