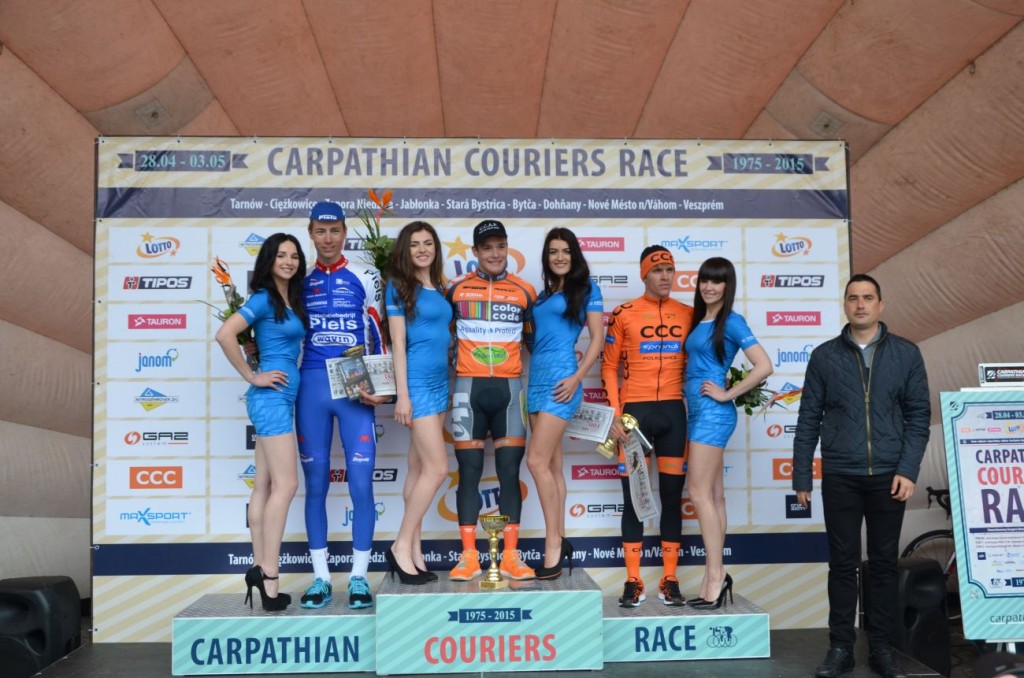 “My chances in the general classification were gone after a day in the mountains, I cracked on a climb and lost some time. Today I got into the break. I’m surprised it worked out, there were many crashes in the finale. I’m really satisfied with the win today” – Mertz said.

“It’s incredible to win a race like that. We worked as a team every day and it’s thanks to the boys that I’m standing here” – Ariesen said and invited all his teammates to sign the yellow jersey.

Ariesen is the third rider of Dutch squad to win Carpathian Couriers Race – previously his fellow countrymen Maurits Lammertink and Stefan Poutsma were rewarded with yellow jerseys in 2012 and 2013 respectively.

Alvaro Cuadros (AWT Greenway) dropped to 2nd overall and Dries van Gestel (Lotto Soudal U23), again in the breakaway, rode himself into the third place.

“I went at the beginning, CCC rider got away too and more people came to us. We all went full gas. I helped my teammate to get bonus seconds on intermediate sprints. We basically rode a team time trial and gave it all for his overall win” – Brusselman explained as Dutch team gathered around podium to celebrate the victory.

The group worked together and managed to establish a gap of 1:30. In windy and rainy conditions riders of CCC Sprandi Polkowice and Jo Piles pushed the pace aiming for two intermediate sprints and the last categorized climb of the race.

Ariesen took 5 bonus seconds on intermediate sprints thanks to Brusselman who sacrificed his lead in sprints classification and worked his lungs out for teammate’s overall success.

CCC Sprandi riders, on the other hand, set the pace on the climb of the race and Stosz took last available points for mountains classification. Peloton was close but never close enough and the group entered the last kilometers with an advantage of 30 seconds.

The race exploded in the technical finale as riders started crashing on slippery roads. Remy Mertz keep his cool until the end and launched an attack in the last corner. Belgian rider avoided crashes and raised his hands in the air, crossing the line in a small group just 7 seconds before remnants of shattered peloton.