Meijers brothers sprint to the victory in Dohnany

Jeroen Meijers (WV De Jonge Renner) won the first and the longest stage of the Carpathian Couriers Race, breaking clear in the final kilometers with his brother Daan Meijers (Jo Piels). The duo worked together for the last kilometers and took first two places just ahead of the chasing group. Jef van Meirhaeghe (Lotto-Belisol) was third on the finish line, completing the podium after a grueling and rainy stage in Dohnany, Slovakia. 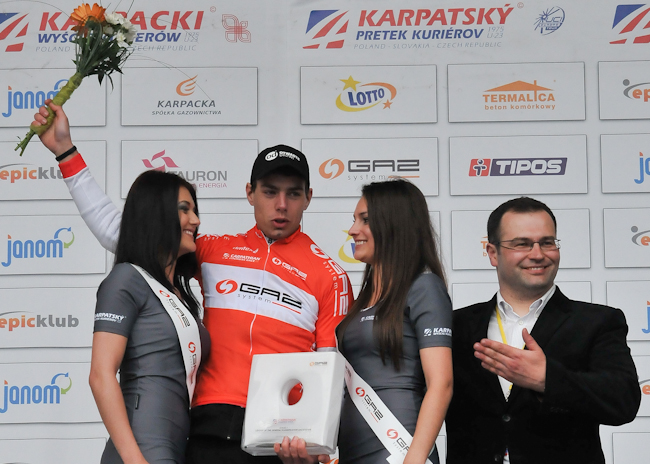 The winner of yesterday’s prologue Boris Vallee (Color Code Biowanze) was dropped on the last climb of a day and lost the leader’s jersey. 20-year-old stage winner took the orange jersey and is now leading the general classification ahead of his brother, Daan.

„The stage was really hard, especially with the climbs and the rain. I had good legs at the begining of the day, on the last climb it was only going better, so I was hanging on in the group. Then the riders started attacking, three kilometers before the line I went away with my brother and then gave it everything I had left” – Meijers explained.

From the drop of the flag, the pace was high, as the riders looked for an opportunity to slip into a breakaway and try their luck on the longest stage of the race. The first attack came on the slopes of an opening climb, where Bram de Kort (Team Jo Piels) and Jan Chalupcik (Epic Dohnany) accelerated, opening a 30-second gap. The peleton was scheduled to pass 1st category ascent of Lednica twice. There have been a lot of attacks, as riders tried to bridge to the break. Some of them succeeded – Sebastian Wotschke (KED Stevens Team Berlin) won the first mountain sprint, beating Chalupcik and De Kort.

On the way to the next climbs nine riders attacked and established 30 second gap. The men in front were Stefan Poutsma (Jo Piels), Wojciech Migdał (Polish National Team), Michael Kukrle (Czech Republic National Team), Artur Shaymuratov (Russian National Team), Oleksandr Golovash (Kiev Regional Team), Carl Soballa (LKT Brandenburg), Otto Vergaerde (Ovyta-Eijssen-Acrog), Patrick Nagler (KED – Stevens Team Berlin) and Maikel Bos (WV De Jonge Renner). It started to rain heavily as the breakaway reached the bottom of Lacnov (3,5 km at 5%). The gap dropped to 20 seconds and Shaymuratov took 3 points on the summit, outclimbing Nagler and Migdał. Peleton was not far behind and seven riders managed to bridge to the front. The next goal was the second intermediate sprint, where Golovash proved to be the fastest from the breakaway riders.

Peleton enterd feed zone 1:20 after the 18-men breakaway. With the last climb of the day – Kohutka (4 km at 12%, max 12%) approaching fast, the bunch was chasing attackers hard, despite a number of punctures. The rain and cold made the racing conditions very demanding and forced some of the riders to withdraw. The peleton streached out on the climb – the leading group started to lose ground. Serge De Wortelaer replaced Vallee in the team’s leader position and pushed hard on the ascent, passing other attacking riders and claiming points at the last mountain climb of the day.

In the final part of the course the long and difficult descent caused a lot of problems – riders punctured, some of them crashed on a wet road leading back to the Dohnany. A group of 22 riders managed to ride away and estabilish a slight advantage. Soon, it became clear that the winner of the stage the is among them. Three kilometres before the finish line Meijers brothers managed to take the initiative, launching a successful two-man attack. The riders from the group worked well together and tried to chase them down but weren’t able to do it. The Belgians crossed the line just before them – taking two podium spots and the overall lead.