Paweł Franczak (Wibatech Brzeg) won the last stage of Carpathian Couriers Race, claiming his first victory of the year in a bunch sprint – just ahead of his teammate and lead-out man Andrzej Bartkiewicz and Quentin Vanheuverswijn (Color Code Biowanze). 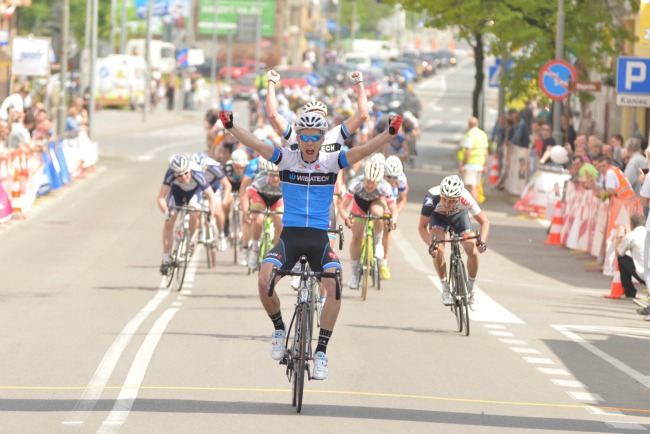 The general classification hasn’t changed and it was Stefan Poutsma (Team Jo Piels) who celebrated the biggest win of his career on the podium in the center of Tarnów. 21-year-old rider, still a little suprised and excited, couldn’t find the words to describe his happiness: „It’s unbelieveable! I’m so happy! I wasn’t expecting this at all. The last stage was hard for me – I wasn’t so strong, every climb meant a lot of hard work for me but the team did a great job today and helped me.”

„This is the biggest vicory in my career. I’m racing as U-23 for the last year and I’m happy to finish this period of my life with this success” – Poutsma smiled after the confirmation of the results.

Stage 4 was the last chance for the riders to change the general classification – three intermediate, four mountain sprints, two uncategorized climbs and just 118 kilometers – all this seemed to be a perfect terrain to attack and earn some bonus seconds on the rivals.

The day started calmly – the attacks started before the first intermediate sprint but no rider was able to estabilish a significant gap and ride away. First two mountain sprints also caused some splits in the bunch but on the descents everything came together.

„There have been some attacks on the climbs but on the descents it all came together and started over again” – Franczak explained after the stage. „We thought that in the final there will be a sprint from the group, so we put the biggest effort in the last five kilometers. Andrzej Bartkiewicz and Tomek Mickiewicz did a perfect lead-out, I finished the job and Andrzej managed to take the second place. We are really happy about that, however the object was the general classification and we failed to ”

Riders looked for an opportunity to form a bigger group on every ascent. All the actions were kept under peloton’s control, however. First attacks came from Oleksandr Golovash (Kiev National Team) but and Sebastian Młyński (Cartusia Stal Regional Team). Boris Vallee (Color Code Biowanze), the winner of the prologue, also tried to get away twice but the peloton found no mercy and chased him down, not letting him join other attacking riders. The only exception was Patryk Stosz (TC Lasocki Chrobry Głógóv) who launched a series of succesful attacks, fighting for every single point – winning three out of four mountain sprints and finally securing the jersey of the best climber of the race.

The final of the stage took place in the center of Tarnów. It all came to a bunch sprint – riders from Wibatech-Brzeg get to the front of the peloton and managed to put their rider into comfortable position. Their action was so strong and surprising that Bartkiewicz made it to the line before the rest of the group and could celebrate his teammate victory.