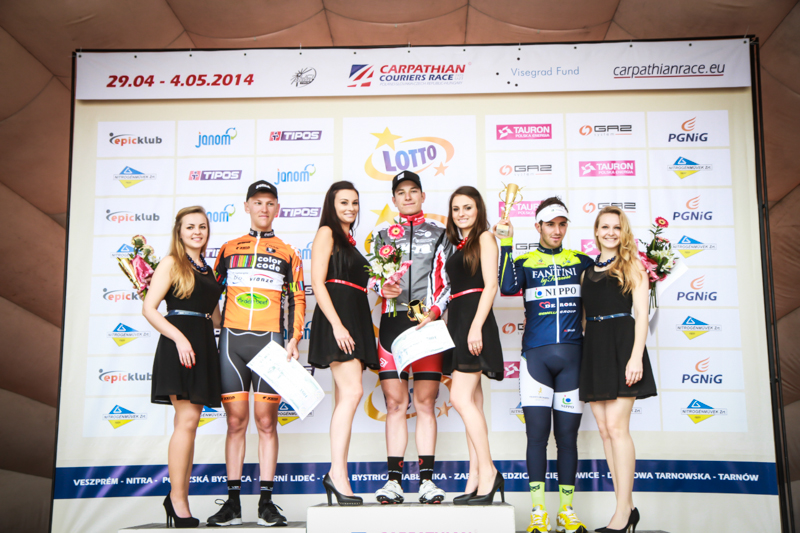 Willi Willwohl (LKT Brandenburg) claimed the victory in the opening stage of Carpathian Couriers Race. 19-year-old sprinter crossed the finish line in Veszprem ahead of Belgian Jerome Kerf (Color Code Biowanze) and Vini-Fantini-Nippo’s Eduard Grosu.
6th edition of Central Europe’s biggest U-23 race is set to visit countries affiliated to Visegrad Group – Hungary, Slovakia, Czech Republic and Poland. Organizers invited 35 teams from different countries and prepared six stages, set in stunning scenery of Carpathian Mountains.
Today over 170 riders signed the startlist and started a 109km loop around Hungarian town Veszprem, fighting not only for a stage win, but also for bonus seconds on two intermediate sprints and one categorized climb.
Attempts to organize a breakaway started at the very begining of the stage, but peloton lead by Lotto Belisol U-23 and Jo Piels teams chased down countless attacks and reached first intermediate sprint (km 44) together. Belgian team played it smart and Amaury Capiot (Lotto-Belisol U23) took the points, just ahead of Tawn Brusselman (Jo Piels) and Erik Baska (Dukla Trencin Trek).
Small teams and the proximity of the finish made it almost impossible to escape. Finally, after over 60 kilometers of racing, a group of six riders managed to break clear. Dutchman Koen Bouwman (Cycling Team Jo Piels) was the one setting the pace and was immediately followed by Daniel Turek (Czech Republic National Team), Andreis Podans (Latvian National Team), Nikolai Shumov (Belarussian National Team), Julian Schulze (LKT Brandenburg) and Przemysław Kasperkiewicz (Bauknecht-Author).
Leaders worked together well, but were not able to establish any significant gap. 30 seconds disappeared as fast as it emerged, as they approached 3km climb (km 72). Most attackers’ only interest were points at the top of the hill, so a game of cat and mouse started. As a result, only Turek and Kasperkiewicz made it to the top, where Polish rider picked bonus seconds and later moved into 7th overall.
Although there was only one climb on the schedule, another difficulties were still to come. What initially looked like a nice and sunny spring day, turned into a heavy downpour. Hail was also a part of action inside final 30 kilometers and the peloton was forced to slow down radically. Bad weather discouraged riders from attacking only for a while, but as the rain stopped, Dutch youngsters tried their luck again.
Cycling Team Jo Piels’ Hoekstra and Bouwman managed to organize an attack, but were immediatelly marked by Kasperkiewicz. Joren Touquet (Wallonian National Team), Maarten Craeghs (Lotto Belisol U-23) and Michał Paluta (TKK Pacific Toruń) also wanted to join the action, but the peloton brought them back very quickly.
It was raining again in the finale, as LKT Brandenburg started setting up their lead-out train. German riders timed their effort perfectly, dealing with tight corner 300 meters before the line and putting their sprinter in a position to take the glory. Willwohl outsprinted Kerf, while Grosu managed to take third.

Willwohl will wear leader’s jersey on stage two. He also leads points and best young rider classification, but those will be on Kerf’s and Kasperkiewicz’s shoulders, respectively. Koen Bouwman is first in mountains classification, while Lotto’s Capiot was chosen the most combative rider of the day.