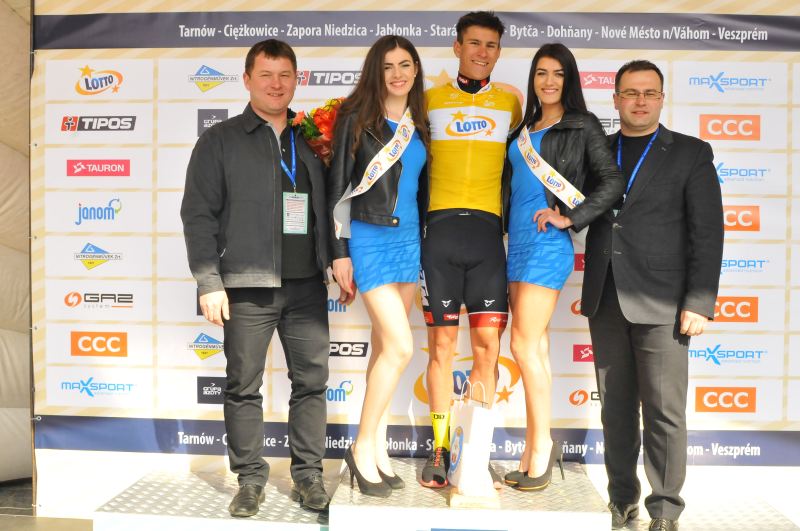 Alexander Wachter (Tirol Cycling Team) has won stage 1 of Carpathian Couriers Race and claimed the leader’s jersey, winning a sprint from a select group on a final climb into Ciężkowice.

Wachter, junior European Road Race champion from 2012, took the lead with 200 meters to go and crossed the line first, ahead of Tim Ariesen (Jo Piels) and Jan Brockhoff (AWT-Greenway). 7th yesterday, having earned 10 seconds bonus today, young Austrian moved into the race lead and will be wearing yellow jersey during stage 2.

„The race on such parcours is impossible to control. There are only four riders left in our team, so it’s not so good. At the begining there were not many attacks because it’s just the begining of the race. I had the same time as the leader so I went with the bigger break on the last climb” – Wachter said before the podium ceremony.

The day commenced slowly as the riders tackled first climbs and started gathering points for mountains classification. Twan Brusselman (Jo Piels) was the first to attack and was soon joined by Maximilian Schachmann (AWT-Greenway) and Patryk Stosz (CCC Sprandi Polkowice) in the fight for the pink jersey of race’s best climber.

Polish National Team put some pressure on the front as Arkadiusz Owsian accelerated and rode away with Yuri Shumilov (Kyiv Capital Racing). The move was neutralized after a couple of kilometers but the peloton has been greatly reduced by the pace and wind. Owsian’s teammate Gracjan Szeląg was first atop last climb Ostry Kamień and soon afterwards a group of ten formed, using lack of cooperation in the bunch to its advantage.

„It was a little bit windy. We had a decent gap, so I saved some energy for the final climb. We didn’t know which way the corner goes, I was in the good position and took it the right way” – Wachter explained with a smile.

„We lost some time in the finale, looking at each other. It was bound to happen, CCC riders were pulling it back” – Wachter said.

Ariesen, 3rd at the prologue, sprinted to 2nd place and was happy to talk to media as young riders exchanged thoughts awaiting for the podium ceremony.

„Wachter went in the good moment. We were all riding and taking turns, we knew the gaps are small. It was all very close” – he said.

„Today was the first race, everybody was saving for the last climb. We went and never stop riding.”

Stage 3 takes riders closer to Slovakian border and will the last chance for the climbers to put their prowess on the display. There are six climbs on the menu and a steep ascent of Ząb marks the last difficulty of the day, 30 kilometers from the finish line in Jabłonka.