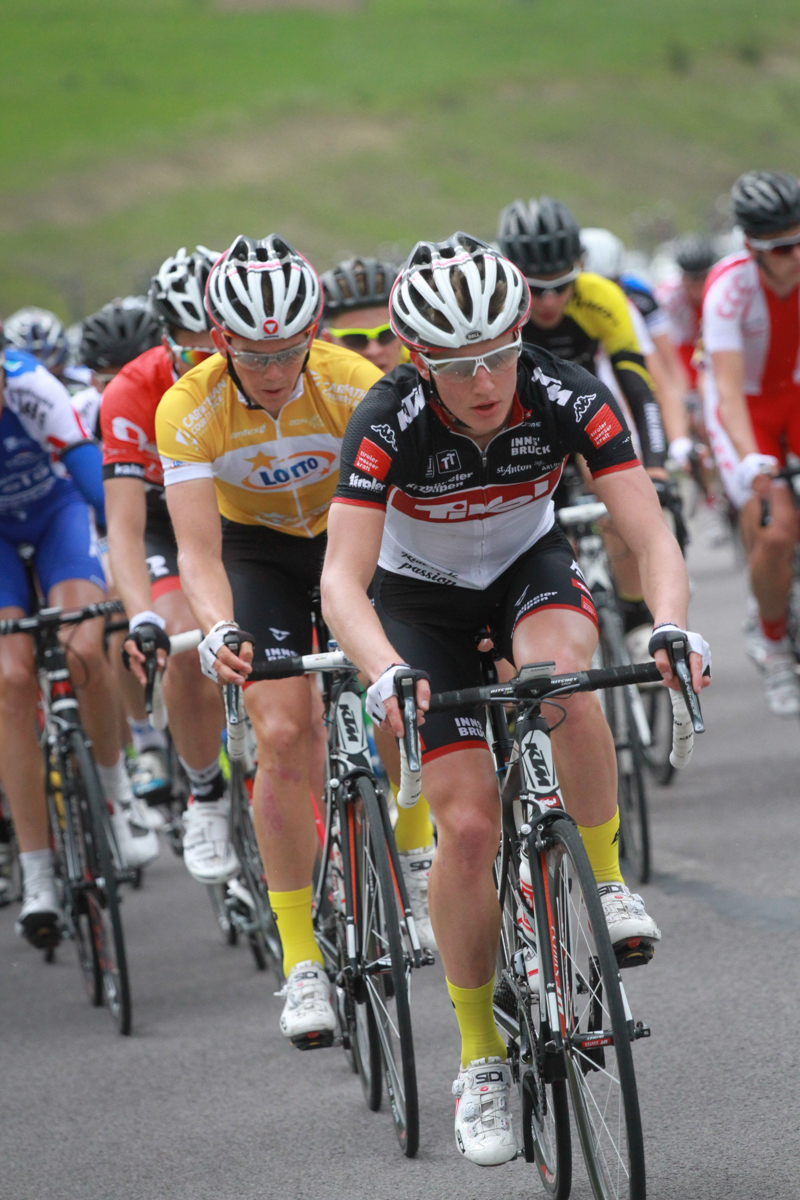 Having swaped black and red jersey of Tirol Cycling Team for blue colours of Team Felbermayr-Simplon Wels over winter, Gregor Mühlberger is not wasting time and has already managed to secure his first win of the season. Young Austrian talent is one of the pillars of continental team and in months to come will have even more chances to demonstrate his prowess on a bike and potential.

„I like it very much in this team, it’s really cool. My teammates and staff are doing a very good job. My roles will be changing depending on races but I will be one of the captains, especially in the U23 races. But I will also do a lot of work for my colleagues. I am really happy to be a part of a squad like that” – Mühlberger said, speaking after his first start of the year, GP Costa degli Etruschi.

„We did a really good job in our first race. Everybody was happy with our riding and the result at the end. The whole team had a perfect start into this season” – satisfied Austrian said, as his two teammates finished in top20.

Mühlberger kicked off his racing program in March with a win n Slovenian race GP Izola (1.2), outsprinting Adria Mobil’s Primož Roglič in the finale of hectic parcours of the race on Adriatic coast, and will be looking to build up towards season’s main goals – namely Carpathian Couriers Race in late April and early May and his home race Österreich Rundfahrt in July.

„My biggest goal is to fight for top places in general classification of Tour of Austria. I will also try to win the Carpathian Couriers Race for the second time” – he explained. „I’d like to come back and defend the title. It’s an important and well-organized race for espoirs, it’s pretty hard, too. Apart from that, I would also like to do well in some one-day races in Italy as well, for example in Trofeo Piva, the race I won last year.”

Five wins in 2014 and stellar rides in national championships – silver medal in elite men time trial behind Mathias Brändle (IAM Cycling) and silver in road race behind Riccardo Zoidl (Trek Factory Racing) opened the gates to Team NetApp-Endura. Having spent a few months as a stagiaire for Ralph Denk’s team (known as Bora – Argon 18 in 2015), young Austrian has already tasted racing on a higher level, competing in USA Pro Challenge and concluding the year with 11th place in Tre Valli Veresine (1.HC).

„I really liked it in NetApp. It was a nice experience in such a great and professional team. If it’s possible to join a ProContinental team [next year], I will surely do my best to take this chance” – Mühlberger declared.

A versatile rider, winner of Istrian Spring Trophy prologue and time trial stage during Carpathian Couriers Race, Mühlberger is however careful not to categorize himself too early and plays down suggestions that time-trialling may become his speciality in the future. „I don’t think so. For sure I will work hard to get better in time trials but it’s not something I will specialize in.”