With Portugal’s red and green flag of his white jersey, Nuno Bico stands out in the peloton. 21-year-old, Portuguese U23 road race champion, is one of five Klein Constantia riders who started 2016 Carpathian Couriers Race and in next days will be trying to repeat team’s success from last year.

„Racing with such a small team, it’s always hard to control the race for one rider, so we will try to be on every move and I believe that we are all equally capable of winning it” – Bico said ahead of the race.

Bico, Portugal’s U23 road race champion, didn’t master the prologue in Veszprem yesterday, on the contrary, he was classified close to the bottom of the table.

„I crashed in prologue but I cannot find out why. There was no dirt on the ground, I just went over the corner and bike slipped like on a wet road. Then my chain dropped off and it took me a while to get it back on” – he said.

Never a time-trial specialist, he wasn’t too much worried – as riders struggled with a technical route of a prologue, his teammate Hamish Schreurs blasted around the course, being the only one to average above 49 km/h over 3300 meters distance.

„There is still a lot to do. We won the prologue, so a lot of work expected these days.” 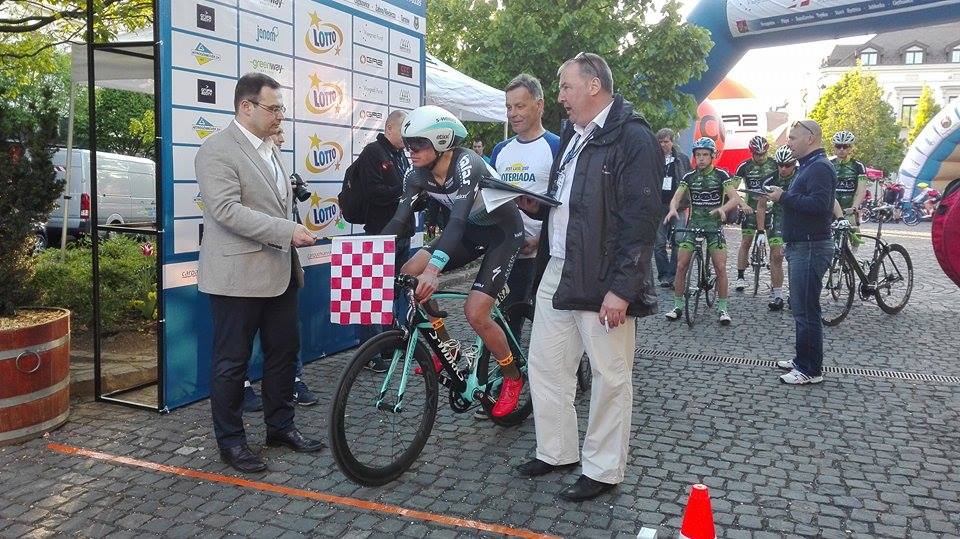 Carpathian Couriers Race visits Hungary, Slovakia and Poland, offering some challenging parcours and remaining a trademark of espoirs racing – constantly changing situation, thousands of attacks and nail-biting finals, especially given slim differences after the prologue and bonus seconds available on the intermediate sprints and finish line.

With Kiwi rider in yellow, the team was once again in the spotlight on stage 1 and tried to control a bunch of over 150 riders that lined-up for a start in Veszprem.

Stage 1 concluded with a bunch sprint in Papa, however, the fight for the general classification took place earlier, as Jo Piels’ Stephan Bakker snatched the lead from Schreurs by gaining bonus seconds at the second intermediate sprint. 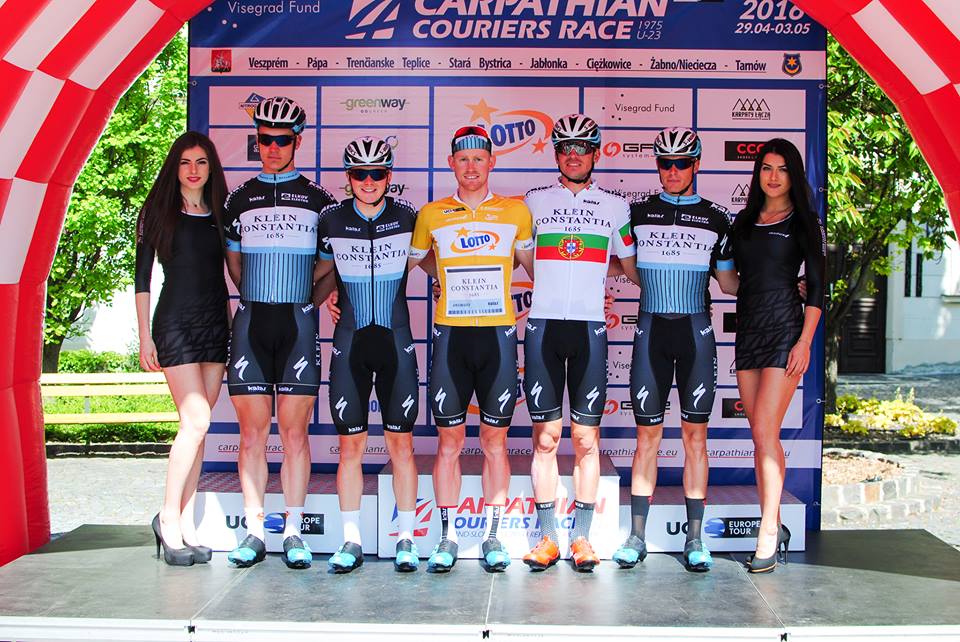 With Schreurs sitting 2nd overall and Bico, Germany’s Jonas Bokeloh, Spain’s Enric Mas, as well as Belgium’s Kenny Molly supporting him, Klein Constantia has a few cards to play but will face some fierce opposition – Dutch riders of Cyclingteam Jo Piels won the race overall on three occasions in last four years and are not going to step an inch back this time either.

„We rode really well as a team, always trying to defend the jersey, but the Jo Piels rider took it from us in the bonus sprint. We then tried to set it up for the sprint but unfortunately Jonas had a crash in the last corner… c’est la vie!” – Bico concluded.

As the race enters Slovakian roads, more climbing is expected. Stage 2 alone is marked by four categorized climbs, including climb of Lutiska, peaking just 7 kilometers from the finish line.

Bico, who is now likely to play a supporting role for his teammates, likes hard this type of terrain and has already demonstrated his climbing abilities with 7th place in Liege-Bastogne-Liege U23, a result he was not, at least initially, very happy about.

„Now that I think about it, it was quite a good result. I was in a breakaway and near the end, when attacks started, I was 3rd up the road with another rider. We got caught with 3 km to go. I was still sick, and after spending 180km out there, with rain and cold weather… it’s not so easy to digest” – he recalled.

Racing with the Czech-based team for the first year, Bico spends more time outside Spain and Portugal, his previous racing and training venues. Being away from home for days and weeks is something young riders face on daily basis as racing in distant countries follows long periods spent at training camps.

„I am enjoying it much more this year. It’s pretty cool to be in contact with new places and cultures.”

Asked about life of a traveller, Bico talks about new places and learning foreign languages.  “But I always try to talk with close friends and my parents. It’s good to disconnect from the racing and talk to those you miss. And when in a different country I always try to learn a little bit of its language. It’s not a good feeling when you are far away from home and can’t really say a word” – he explained.